Due to circumstances outwith the control of the Games organising committee, we regret to advise that there will be NO Highland Dancing competition at the 2022 Cornhill Highland Games.

The Highland Fling – The most famous of the solo Highland Dances, said to derive from the antics of a courting stag on a Scottish hillside.  The raised arms imitate the stag’s antlers.

The Sword Dance – Originated in 1054, the dance since became a ritual before battle in which clansmen would dance as close as possible to the sword blades – a sign of daring as to touch the blades was a bad omen for the next day.

Shean Truibhas – Meaning ‘old trousers’ in Gaelic.  The dance recognises the repression after the Jacobite Rebellion of 1745 when bagpipes and kilts were banned.  Dancing is done in trousers and the slow tempo represents the disgust at having to do so, whilst the shaking movements represent shaking off the trousers and the quick steps are displays of pleasure when Scots were once more able to wear the kilt. 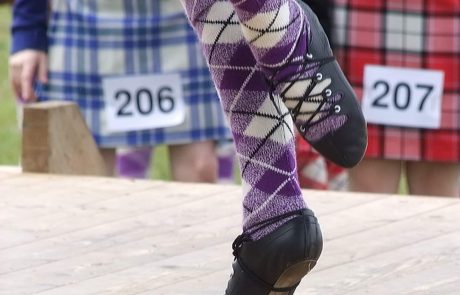